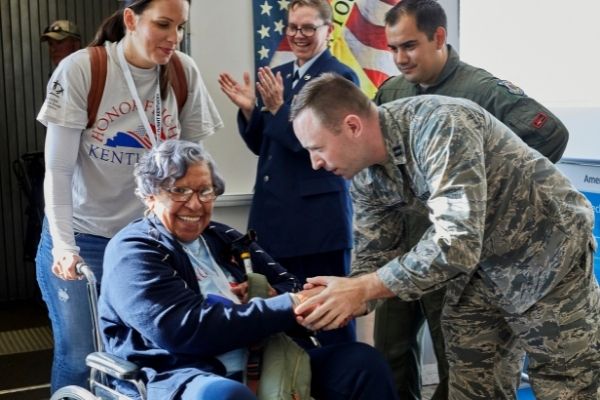 As William Stephens put his foot on the step, he gripped the rail that would pull him up into the bus and took a deep sigh. He turned his head to catch a glance of his poor old mother who could barely even walk. She would have gone to great lengths, even if it would have meant flying, just to see her one and only son off for the last time. When William looked at his mother, he felt agitated and hesitant to step into the bus. “What if something bad happens to her?” He questioned himself. He could not let that happen; she was all he had left.

William grew up without a father. His mother, whom he loved so dearly, raised him to be the great man he was today. His mother gave birth to him quite later in her life; by the time he was an adult she was pretty old. As William grew up, she was diagnosed with Dementia. Day by day, William had to learn how to take care of his mother who had forgotten to do even the simplest of things.

William looked down at his thick army boots while rethinking his decision. It was far too risky to leave his mother all alone. He dropped his duffel bags and ran towards his mother like a little kid. He wrapped his arms around her and tears began to roll down his eyes. “I can’t do it mom. I can’t go and leave you here all alone.” He wept. His mother could barely hold all his weight as she desperately tried to regain her balance. The only thing that kept them from falling was the tight grip she had on her walking stick.

“Don’t be silly my boy, you have to go!” She sounded so excited, almost as if she was not finding it hard to say goodbye. He stared at her in disbelief. She gently held his face and wiped his tears away. “I have been moved to the retirement homes and it’s not so far from the house, so you do not have to worry about me.” That information lifted the weight of worry from William’s chest. “But they don’t know how to take care of you as well as I do!” William wailed. His mother couldn’t help but notice how overprotective her son was being. “But he has to go. He could not have trained for all those years just to bail on the mission at the last moment.” His mother thought.

The Young Soldier gave his mother one last kiss on the cheek and said goodbye. The General shouted for all the men to get into the bus since their journey was about to begin. He picked up his duffle bags and hurried back to the bus door. William was the last one to enter the bus and the doors slammed shut. The only available seats were at the complete back. He put his luggage in the cabin compartment. His mother smiled and waved him goodbye. The soldier lost sight of his mother to the horizon as the bus drove off.

His anxiety was building up and by the time he realized that they had arrived at the military airport, it was already through the roof. The American Military was going to war with Afghanistan. He had joined the military to help pay for his mother’s medical bills. Due to her age and illness, she could not work anymore. The military seemed like a good resort as it paid well and he found a lot of pride in fighting for his country. However, that day in particular, was not one that he wanted to come as soon as it did, the day of the Great War.

The General motioned for them to get off the plane as they had reached Afghanistan. William was having a mixture of emotions and did not know what to feel. His anxiety began to kick in once again as his hands fidgeted. Despite this, he could not help but think of how his mother was doing. Worry crept into him but he remembered she had told him that she would be fine. So he purposed not to worry. He would finish the mission and then finally go back home.

The men were each assigned different sites to guard against the Afghans. They got to their posts with tanks that were flown in. William stepped out of it and took a deep breath in preparation of what was to come. He looked around and noticed all the buildings demolished to dust. It was common for them to be unfair and use their many resources to their advantage and others’ devastation. “Classic American move!” he was not even surprised. With his gun wrapped around his waist, he took position and watched out for the common ‘enemy.’

William dropped to the ground. They had been ambushed and the rival managed to sneak up on William and shot him to get past their defenses. This happened because the soldier did not pay attention for a minute. He was thinking of his mother. When William’s partner noticed his fall, he rushed towards him, his cold lifeless body lying on the dusty ground. It was almost unreal. His fellow soldier tried to put pressure on his fresh wound in an attempt to reduce the blood loss. The soldier felt William’s last heartbeat.

As the edifice vanishes into the horizon you immediately get a whiff of the nostalgia soon to come: what a memorable experience!